book your stayClose
Reservations call-reservation1-877-418-3011
Book Your stay
Adults in Suite: __count__
live chatLive Chat
Paradise Awaits
We returned to Casa Velas for the 2nd year in a row & we were even more happy with our stay this time! It s the most quiet & peaceful resort we have ever stayed at. If you are looking for a relaxing getaway, this is the place to go! The grounds & accommodations are beautiful & the staff could not be more helpful and pleasant! We will be back at Casa Velas again!
Lyla V
TripAdvisor
A Honeymoon Well Spent
We spent our honeymoon here and couldn't have been happier. Everything from the staff to the bathroom cleanliness was excellent. The food was delicious, the pool and beach club were gorgeous, and the service was incredible. We also used the spa for a couples treatment and were dazzled by the amenities and staff. The location and security were also fantastic. Very close to the marina and it's nightlife, while being only a short drive from the central Puerto Vallarta boardwalk. Finally, the on-site activities were a joy. Each night there was a new theme (e.g. a "Cuba" night, a casino night, etc.) and we loved them all. It was a truly wonderful experience and I wouldn't recommend staying anywhere else.
Jon W
TripAdvisor

The Birdie and the eagle didn't land. A study in an eye-hand coordination golf lesson that didn't work

Besides the obvious activities at Casa Vela Boutique Hotel, Puerto Vallarta,  tennis, swimming, tanning, reading, I had a most interesting idea.  I wanted to take a golf lesson. Why? Since so many of my friends are devotees, I thought it may be something to do when I have some free time.  Well, I needn't have worried since I never have enough hours in the day.  But what the heck, I was in a warm climate and golly, I have an hour before heading back to my computer.

I haven't held a golf club in my hands in decades.  And to be truthful, I never played a game or even got to the first hole.

But older now and sensing that I may one day, in the near future, need a hobby, I thought golf may fill the bill.

The exceptional concierge at Casa Velas, booked an hour lesson with Antonio, a true pro of a certain age, and the golf club just a 5 minute shuttle ride from Casa Velas.

Antonio, in his mid 50s, immediately  intimidated me with his 25 year old body, ingratiating smile, patience, and confident that anyone could hit a ball. Perhaps not as had continued to do when he started to show me the steps.  He made hitting 150 yards easy. 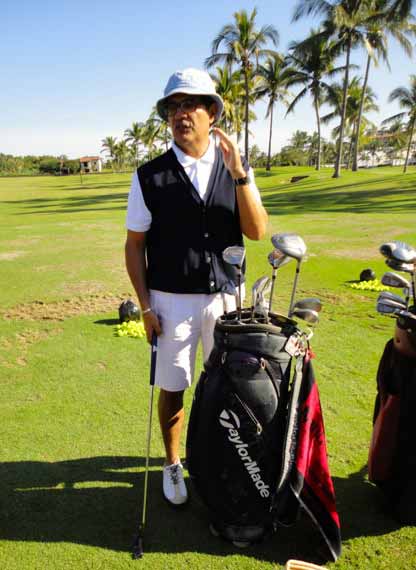 Four of us in the group lesson, were given either an iron  or a wood on which there was a number  (my iron was #7) which, Antonio assumed we knew that each had a reason. But with some embarrassed looking students, he explained as much as we could absorb.   We walked to the green area where there were about 25 ball prepared for each of us.

It was a pathetic start.  First Antonio showed us how to hold the club -over and over again.  "Make a ‘V' with your fingers on your left hand, now place the other hand and fingers in a ‘V" over them.  Hold the club tightly with your left and swing with slightly bent elbow." Okay, that was done.

It surely sounded easy as I followed, impeccably, his orders.  At first I was given an iron club and a tee where I placed the white dimpled balls.

Ah, that was easy.  But then I seemed to have started a small cemetery plot in the turf. One after another, I tried to hit that white round ball but never made great contact.  Then suddenly, with the suggestions of Antonio, I actually hit the ball but I could have been bowling, since contact after contact, they just rolled on to what was left of the grass around my footing.

After about 10 tries I had a triumph, I think due to my being ashamed at my inadequacy.  I actually hit 4 balls, one after another, in the air, above the ground, but none exactly flying high into the air.

Now feeling more confident, I was given a large headed wood club, I can't recall the number in all my excitement.  Suddenly it seemed as though I might have a chance of actually learning and really wanting to play this obviously difficult game. My hand eye coordination was my lame excuse for not being better. And when I watched one of my colleagues, she too, a newbie, was hitting them high into the air, perhaps 25 feet from where we were.  Becca was a natural from the start.

By the end of this hour lesson, I knew the only thing I had in common with Tiger Woods was that my maiden name was Woods.

At that moment, I knew I would have to decide on another old age hobby and activity.  This was definitely going to be my last ever lesson and my farewell to the greens, the roughs, the links and all the areas of the golf course that I would never step foot on again.

But I give kudos to Antonio. He never smirked and his patience was outstanding.  Next stop, I'll try my hand at bridge.  Maybe not such a great idea since I detest card games!

© Velas Resorts. All Rights Reserved
Back to top